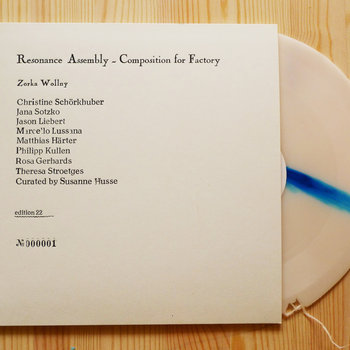 This AltanovaPress record include composition by Zorka Wollny, which was performed on Factory as instrument. Zorka Wollny' work was performed and registred by team of musicians and sound engineers in Berlin in 2014

High-quality digital recording techniques have been implemented in PCL material (each was cut separatly) in Lo-Fi mono quality. Many analog distortion resulting in the production process, result in a recording of exceptional rare quality, impossible to create in modern recording studios.

A DISTRICT BERLIN production in collaboration with Sound Studies,
UdK and Malzfabrik, 2014.

Released on the occasion of the exhibition „Satellite Affects and Other Lines of Flight“ at DISTRICT Berlin, 2015.